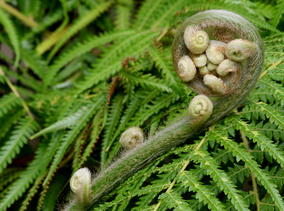 The Monilophyta is composed of the horsetails, whisk ferns, and eusporangiate and leptosporangiate ferns, with most of the roughly 12,000 monilophyte species being leptosporangiate ferns. The monilophytes are believed to be the sister group to the seed plants. The clade composed of the monilophytes + seed plants is known as Euphyllophyta. The sister group to Euphyllophyta is Lycophyta (the clubmosses, spikemosses, and quillworts). The lycophytes and euphyllophytes together comprise the vascular plants (Tracheophyta).

Monilophyta is similar to the traditional group known as the pteridophytes (ferns and fern allies), which consisted of all the seedless vascular plants. However, the lycophytes were considered pteridophytes but are excluded from the monilophytes since the remaining "pteridophytes" (which now constitute Monilophyta) are believed to be more closely related to the seed plants than they are to the lycophytes.